Posted by Brian Volkman on 5/13/2020 to Recent Publications 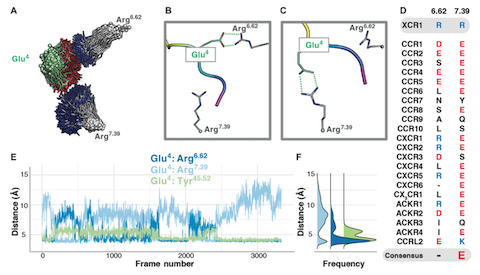 Ligand-receptor interactions trigger many cellular behaviors and changes that underlie various physiologic processes. Understanding what determines the specificity of these interactions, therefore, can explain disease and inform the development of targeted therapeutics. An article published last year in the journal Science Signaling shows how specific intermolecular contacts allow chemokines to recognize only certain GPCRs. The chemokine XCL1, which is produced by activated T and NK cells, attracts XCR1-expressing dendritic cells to promote antigen cross-presentation. Fox et al compared the XCR1 agonist activity of a series of XCL1 proteins with substitutions in the first 10 amino acids of the N-terminus (VGSEVSDKRT). Changes to any of the first four residues reduced XCL1-mediated chemotaxis, with the Glu4 to Ala substitution having the largest effect. Structural modeling suggested that either of two Arg residues in XCL1 (neither of which would be present in a CC chemokine receptor) might form direct contacts with Glu4. Functional assays on XCR1 mutants showed that Arg6.62 was the more likely binding partner for Glu4 of XCL1. In addition to showing the power of such hybrid approaches, these findings specifically on this chemokine signaling axis may have implications for diseases associated with altered dendritic and T cell immune responses.
Protein Foundry can supply recombinant XCL1 proteins, including any of the XCL1 variants used in the study by Fox et al.
Previous Post 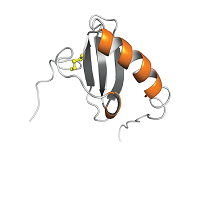